What is money laundering?

Money laundering is the illegal process of making money generated by criminal activity, such as drug trafficking or insider trading, appear to have come from a legitimate source. The money from the criminal activity is considered “dirty”, and the process “launders” it to make it look “clean”.

Other criminal activities where large amounts of illegal money might be made include:

Money laundering offences assume that a criminal offence has occurred in order to generate the criminal property which is now being laundered. This is often known as a predicate offence. The above are examples of “predicate offences”.

Money laundering is essentially circular in nature - collecting, processing, and returning proceeds of crime “back” to the criminal.

By successfully laundering the proceeds of criminal activities, the illicit gains can then be enjoyed, avoiding seizure or confiscation.

A criminal may, for example, put a deposit down to purchase property with funds received from drug trafficking. They will eventually go on to sell it. This process makes the illegally gained money appear legitimate at the same time as seeking to safeguard and grow the investment value/capital. In this example drug trafficking is the “predicate offence”.

The traditional money laundering cycle is set out below: 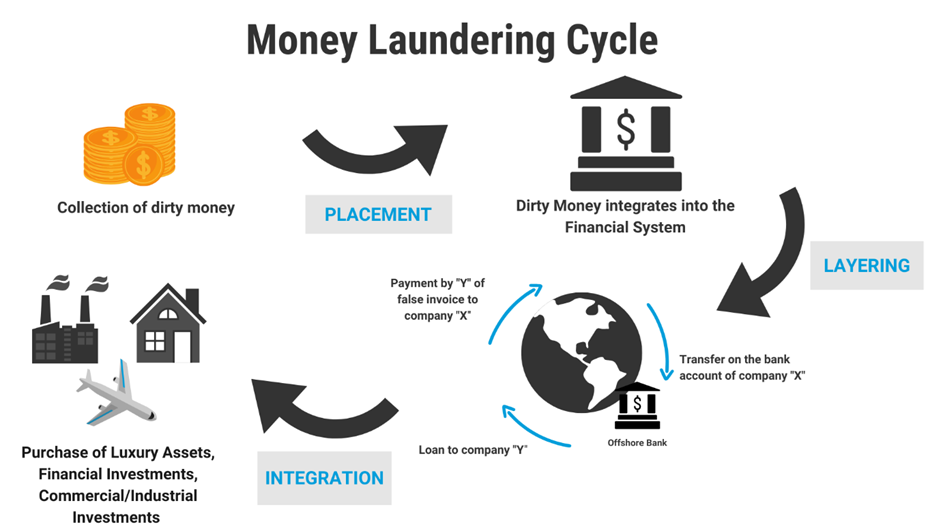 In its annual report for 2021 MONEYVAL estimated that funds laundered worldwide had a value ranging from USD500 billion to USD1 trillion.

It is not unusual for the traditional money laundering cycle to use the following, to conceal the true beneficial ownership and control of funds and other assets.

Money laundering may be facilitated by “gate-keepers”, such as lawyers and accountants, who provide assistance to access the global financial system. These gate-keepers may also provide a perception of legitimacy.

Examples of other forms of money laundering are:

Newer money laundering trends present new challenges, such as those relating to the emerging virtual assets sector, and other elements of “de-centralised finance”. These new ways of transacting remove traditional controls that businesses, such as banks, have on financial flows and associated services. The traditional money laundering model may not fit in such circumstances. An alternative way of considering the process is as follows:

Examples of money laundering typologies can be found on Government of Jersey and MONEYVAL websites.

Jersey legislation applies the offence of money laundering to all serious offences. It includes all the designated categories of offences that are listed in the FATF Recommendations.

Drug trafficking is a global illicit trade involving the cultivation, manufacture, distribution and sale of substances which are subject to drug prohibition laws. It involves carrying out, or being concerned in, any of the activities that contravene provisions of the Misuse of Drugs (Jersey) Law 1978, whether in Jersey or elsewhere.

Additional information can be found on the UNODC website.

Financial flows linked to the production and trafficking of Afghan opiates (fatf-gafi.org)

Trafficking in human beings takes place when someone is taken against their will, bought, sold and transported into slavery for such things as sexual exploitation, sweat shops, child brides, circuses, sacrificial worship, forced begging, sale of human organs, farm labour, or domestic service. It can take place both domestically and internationally and always has an exploitation aspect of trafficking that is absent in migrant smuggling operation.

This FATF report describes the money flows related to these two distinct problems and attempts to assess their scale:

Migrant smuggling is a transnational crime that only takes place across borders. It consists of assisting migrants to enter or stay in a country illegally. Smugglers make a profitable business out of migrants' need and/or desire for a better future in another country, and their lack of legal documents to do so. It often causes migrants significant physical harm, suffering and violation of their human rights.

This FATF report identifies the most common methods to transfer and launder the proceeds of migrant smuggling:

Illicit firearms trafficking involves illicit manufacturing of and trafficking in firearms, their parts, components and ammunition.

In Jersey, a licence is required to export military and dual-use items. Dual-use items are those which can be used for both civil and military purposes and include software and technology.

Further information on can be found on the UNODC website.

Corruption is the abuse of public office for private gain. The offenses can range from petty or systemic corruption, in which public officials or employees receive money to perform (or refrain from performing) official acts, to what is known as ‘grand corruption’, where public figures at the decision-making levels of government use their office to enrich themselves, their families, and their associates.

The FATF has prepared reports on the corruption related money laundering typologies and risk assessment:

Laundering the Proceeds of Corruption (fatf-gafi.org)

Specific Risk Factors in the Laundering of Proceeds of Corruption - Assistance to reporting institutions (fatf-gafi.org)

Bribery is the corrupt solicitation, acceptance, or transfer of value in exchange for official action. Along with corruption, bribery has been addressed by FATF within its framework through a series of initiates, publications and statements available on the FATF website.

Fraud covers a range of offences. These include fiscal offences, such as tax evasion and exchange control violations, and the obtaining of goods or services by deception or false accounting.

Fraud is capable of predicating an offence of money laundering in Jersey. A deliberate false representations made with the intention and consequence of causing actual prejudice to a revenue authority and actual benefit to another, may constitute common law fraud.

For example, this FATF report provides a study on laundering the proceeds of VAT carousel fraud:

Illegal wildlife is a major transnational organised crime which fuels corruption, threatens biodiversity and can have a significant negative impact on public health and the economy.

An example of this crime is illicit wildlife trafficking, which may lead to the spread of zoonotic diseases like rabies and plague.

Environmental crime includes, but is not limited to, illicit:

The FATF distinguishes between different types of money laundering.

Self-money laundering is the laundering of criminal proceeds by a person who was involved in the commission of the predicate offence. The sums laundered, and the number of parties involved, are usually smaller. The traditional money laundering model is often used.

In Jersey, self-money laundering is a criminal offence. A money laundering investigation is frequently the only way to locate the stolen funds and restore them to the victims, especially when criminal funds are derived from robbery, extortion, embezzlement or fraud.

Third party money laundering is the laundering of proceeds by a person who was not involved in the commission of the predicate offence.

An example of third party money laundering would be the facilitation of financial transactions for a drug dealer by a family member or friend through their personal or business bank account.

Professional money laundering networks involve organisations and individuals facilitating money laundering, often in return for a fee or commission, and often in a highly sophisticated and organised manner. It may involve utilising complex, opaque and global ownership structures, cross-jurisdictional transactions and the handling of larger sums of money.

Stand-alone (or autonomous) money laundering refers to the prosecution of money laundering offences independently, when there is no evidence of the true source/origin, or a specific predicate offence. This could be particularly relevant when there is insufficient evidence to pursue the particular predicate offence, or when in receipt of a guilty plea.

Our comparison table displays examples of the differences and similarities between various characteristics of money laundering, terrorist financing and proliferation financing.

Countries’ risks also vary between money laundering, terrorist financing and proliferation financing as shown in the Appendix D2 of the Handbook.

For reporting requirements refer to Section 8 of the Handbook.